What Happens When Amateurs Write “Standards” 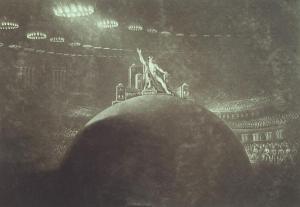 John Martin, illustration for John Milton’s Paradise Lost, “Satan Presiding at Internal Council.” (Or is this an illustration of a meeting of the CCSSO and NGA to come up with a totalitarian set of “standards” to foist upon everyone else in the country?)

I am having a lot of fun identifying the howlers in the Common [sic] Core [sic] State [sic] Standards [sic] for English Language Arts. Here’s one for your amusement:

This is reading “anchor standard” 8:

CCSS.ELA-LITERACY.CCRA.R.8. Delineate and evaluate the argument and specific claims in a text, including the validity of the reasoning as well as the relevance and sufficiency of the evidence.

Amusingly, the “literature standards” tell us, over and over, that this “anchor standard” is “not applicable to literature,” that it applies only to “informative text.”

That would be news to the speaker of Milton’s Paradise Lost, who invokes the Holy Spirit, at the beginning of the poem, and asks this Christian Muse to help him, in the poem, present an argument to “justify the ways of God to men.”

Maybe it’s been a while since you read or thought about Paradise Lost. Go have a look at Book I. You will find, at the beginning of it, something the author actually calls “The Argument.” It’s a brief preface that serves as an abstract of the claims, reasoning, and evidence to be presented in the book.

Do they actually think that Ambrose Bierce‘s “Chickamauga,” Thomas Hardy’s “Channel Firing” or “The Man He Killed,” Wilfred Owen’s “Dulce et Decorum Est,” Erich Maria Remarque’s All Quiet on the Western Front, Dalton Trumbo’s Johnny Got His Gun, Tolstoy’s War and Peace, Kurt Vonnegut’s Slaughterhouse-Five, and Randall Jarrell’s “The Death of the Ball Turret Gunner” do not present implicit and explicit arguments against war, do not advance specific claims (Tolstoy: Napoleon had no clue what was going on at Battle of Borodino, and generals rarely do) , and do not employ reasoning and evidence in support of those claims? And what on earth would they imagine such poems as Hesiod’s Works and Days, Lucretius’s De rerum natura, Pope’s “An Essay on Man” and “An Essay on Criticism,” Wordsworth’s The Excursion, Shelley’s “Queen Mab,” and Erasmus Darwin’s The Temple of Nature to be if not, primarily, arguments?

And do they really think that arguments are not put forward in, say, Rumi’s “Like This,” Donne’s “The Sun Rising,” Marvell’s “To His Coy Mistress,” “Gray’s “Stanzas Wrote in a Country Church-Yard,” Burns’s “Song Composed in August,” Blake’s The Marriage of Heaven and Hell,  Tennyson’s “In Memoriam A.H.H.,” Dickinson’s “I heard a Fly buzz—when I died,” FitzGerald’s The Rubáiyát of Omar Khayyám, Yeats’s “Adam’s Curse,” Eliot’s “Burnt Norton,” Wallace Stevens’s “Credences of Summer,” MacLeish’s “Ars Poetica,” Frost’s “Directive,” Levertov’s “A Tree Telling of Orpheus,” Mary Oliver’s “The Summer Day,” and Billy Collins’s “Introduction to Poetry”?

Really? Seriously? I know, it’s almost unimaginable that they do.

But let’s do a little CLOSE READING of the “standards” to see what EVIDENCE we can find to help us answer those questions. Inquiring minds want to know.

If you turn to the writing “standards,” the suspicion will grow in you that the authors of these “standards” were, indeed, that naïve. The breathtakingly puerile Common [sic] Core [sic] writing “standards” neatly divide up all writing into three “modes”–narrative, informative, and argumentative–and encourage teachers and students to think of these as DISTINCT classes, or categories, into which pieces of writing can be sorted.

Imagine, for a moment, that you are reading an exposé on this blog or Mercedes Schneider’s or Diane Ravitch’s that tells the story of how some people got together in a backroom and cooked up a bullet list of “standards” and foisted these on the entire country with no learned critique or vetting.

Perhaps such a piece would only SEEM to be an informative narrative told to advance an argument. Perhaps writing consists entirely of five-paragraph themes written in distinct modes and we’ve been hallucinating JUST ABOUT EVERYTHING ELSE EVER WRITTEN, which doesn’t fit neatly into the categories advanced in the “standards.”

And, standard after standard, one encounters the same sort of simple-mindedness about literary types and taxonomy. One gets the impression, reading these “standards,” that a group of nonliterary noneducators–some small-town insurance executives, perhaps–got together and made up a bullet list of “stuff to learn in English class” based on their vague memories of what they studied in English back in the day. (I don’t intend, here, BTW, to disparage the literary sophistication of all insurance executives; Wallace Stevens was one, after all, and he may well have been the greatest American poet of the twentieth century. On what other would we place the red cloak?)

Of course, what the folks behind these “standards” really did was convince one plutocrat to hire an amateur who hadn’t taught and who knew very little about the domains he was going to work in to hack together a bullet list based on a cursory review of the lowest-common-denominator educratic groupthink in the previously existing state “standards.” In effect, a few plutocrats appointed this person (by divine right?) absolute monarch of instruction in the English language arts in the United States. My feeling is that similar results would have been obtained if a group of plutocrats had handed David Coleman a copy of the 1858 edition of Gray’s Anatomy and sent him to a cabin in Vermont to write new standards for the practice of medicine.

And, of course, the one rich plutocrat who wrote the checks hired Coleman to do this hack job because he wanted ONE set of standards for the entire country to which to correlate the ed tech products (computers, operating systems, Orwellian databases of scores, standardized tests, depersonalized education software, etc) that he and others planned to sell “at scale.” In other words, the single bullet list was a necessary part of an ed tech business plan. One ring to rule them all!

And that ought to be obvious enough, for surely no one who thought even a bit about these matters would conclude that

c) these matters should be set in stone instead of being continually rethought and revisited in light of the discoveries and innovations made by the millions of classroom practitioners, scholars, researchers, and curriculum developers working in the domains that the “standards” cover.

Of course, it’s typical of a certain kind of philistine to divide the world neatly up into the objective (informative works) and the subjective (literary works) and so to think that  simple-minded categorizations like the ones to be found in the Common [sic] Core [sic] make sense. The same sort of person thinks that one can reduce learning to a bullet list in a stack of Powerpoint slides.

And, it’s typical of such people to have a rage for order and an inclination toward authoritarianism. Such people admire standardization and regimentation and expect others–all those teachers, and curriculum coordinators and curriculum developers out there–simply to obey. In his Devil’s Dictionary, Ambrose Bierce defines arrayed as “drawn up and given an orderly disposition, as a rioter hanged from a lamppost.” I suspect that the people behind these “standards”–the folks who claim that standardization, centralization, and regimentation will lead to innovation, as Bill Gates just did in a speech to the National Board for Professional Teaching Standards–would approve of Bierce’s definition. And they would probably like to see folks like me so arrayed.

Update: It seems that the CC$$ have been quietly updated to take out the repeated instances where we were told that this “standard” doesn’t apply to literature. LMAO.

NB: Gray’s original title for “Stanzas Written in a Country Churchyard” used the word Wrote, a purposeful grammatical error, or solecism, of the kind that might be spoken by one of the subjects of his poem.

For more pieces by Bob Shepherd on the topic of Education “Reform,” go here: https://bobshepherdonline.wordpress.com/category/ed-reform/

For more pieces on the teaching of literature and writing, go here: https://bobshepherdonline.wordpress.com/category/teaching-literature-and-writing/

16 Responses to What Happens When Amateurs Write “Standards”